The United Church is technically not one religion, but four. The four major human Gods, Tyaus, Aethon, Gebrick, and Vaitera form the Quadrimvurate of the United Church, which is considered the official religion of the Realm. While worship of these gods individually remains prevalent and popular, the average citizen of the Realm is likely to simply be a follower of 'the United Church', rather than any one particular God. 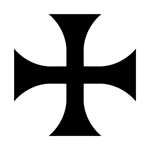 Cross of the United Church

Formation of the Church

‘The Pantheon’ is the term most often used collectively for all the Gods. Its definition is occasionally vague; sometimes it will be used to refer to every known deity, sometimes speakers in the Realm will use it to refer to all except ‘hostile’ Gods, the goblin Gods. This usage has been more common since the Fall and the banding together of the various free races. Rarely it might be used in reference to just the the human Gods and the unaffiliated Gods still worshiped by many humans, excluding not just the goblin deities but Thoron and Dredden Stonehelm also. Collectives of Gods are ill-established, and usually very subjectively defined.

The greatest exception to this is the United Church. Humans and goblins are the only two species to have more than one God who has identified with their race specifically, and the goblin deities are perceived to be two halves of a whole, each representing all that the other does not - all that goblins value, at least. The unity of the four human Gods is a more artificial construct, by the deities themselves and their followers.

Relations between the four faiths have always been cordial. Tyaus and Aethon may have in the past seen some competition, both being very masculine and authoritative figures and teaching such values to their followers, but both the Gods and the churches settled comfortably into accepting their respective roles - Tyaus as the leader, and Aethon as the warrior. Even when humanity were scattered, with barely a single nation between them, worship of the four human faiths was the most common. Consequentially, although most humans would worship only a single God, they were often very familiar with the other three.

This familiarity would only increase as civilisation developed. As people travelled more, visiting other settlements, they came into more contact with other religions; similarly, the notions of pilgrims and other travelling faithful rose and saw worshippers spreading the word of their God. The closeness came both from the followers naturally finding themselves with things in common, and even the Gods themselves encouraging and directing such familiarity.

The Church says that it was Tyaus who first conceived of the notion of unity. As the faiths found themselves closer and closer, they ran the risk of sparking competition. As followers became more aware of the worship of the other three Gods, priests became apprehensive of conversion. Such tension was simply dangerous, especially at a time when humanity was coming together in the Realm, and when enemies such as the Sahradians were so close and so dangerous in Ibarran.

Thus it was the faithful of Tyaus who started the call for unity - but it was picked up swiftly. To unite humanity in faith as well as governance, to stand strong against the dangerous heretics who would threaten the Realm. And to allow worship of one to be worship of all. The archbishops of each of the four churches gathered from across the Realm in the Cathedral of Tyaus in Fordheim. For a week they sat and discussed the options, but each of them had received at least an urging from their God, and it was not a question of whether to unite - but how.

It was a testament to the strength of each faith that when they emerged on the steps of the cathedral and proclaimed the formation of the United Church that this decision was greeted overwhelmingly positively. And a testament to the weight they held even politically that it took very little time at all for their first call to be picked up by the leaders of the Realm: to declare war on Ibarran and free it from goblin rule.

There are no churches of ‘The United Church’, and no Priests of the Quadrimvurate (an archaic, rarely used term to refer to the four Gods). But the average man or woman of the Realm still prays to all four.

If a man lives in a village where the local church and local priest are devoted to Tyaus, then it is Tyausian prayer that he will hear most, Tyausian hymns that he will sing most. But when the populace come together, the priest will lead them in prayers to Gebrick, to Aethon, and to Vaitera, as a matter of course. If the man wishes to pray for a good harvest, he may kneel in a Tyausian church and utter a prayer to Gebrick.

Priests of any of the four are thus required to have a basic grounding in the teachings of the other three, to be able to lead their congregations in everyday prayer, and to offer basic advice on the worship of the rest of the United Church. For most people for most of their lives, this level of religious guidance is all that they need, and they would of course have a greater grounding in the denomination of their local church and priest, but they would consider themselves as followers of the whole of the United Church, respectful of them all.

The more ardently faithful differentiate rather more. Priests, paladins, and the particularly devout are more keenly aware of the difference between the four Gods. They would consider themselves worshippers of their own deity, first and foremost - but nevertheless, the rest of the United Church would receive more of their respect, and regular prayers, than any of the unaligned Gods. Even a paladin of Aethon will utter a prayer to Tyaus daily or weekly, and beg for the attention and aid of Vaitera in looking over an ailing loved one.

There are some prayers, texts, hymns, and stories which stretch across the four denominations, especially the sort of hymn that might be sung weekly. The most notable text is the Libris Unitas, but despite its fame and importance, it is one of a kind. For the most part the four religions have grown together over the centuries enough to incorporate each other in their faith, in their stories and practices, in a more naturally symbiotic manner. A priest of Tyaus might relate a morality tale that exists in the teachings of his God, but the possibility that an aspect of Gebrick might be present within the story to lend a lesson in humility always remains.

This arrangement has proven to suit both followers and Gods. For the Gods, it means that humanity can worship them all without any need to enter a competition for followers. All human members of the United Church are considered worshippers of all of them, and for the religious needs of everyday people, being able to utter a prayer to all four is sufficient. For the people, it means that they are not only brought together across four faiths - some of which can differ quite notably - but it means that they feel as if they have yet greater protection from the Gods without betraying their faith.

Although each of the four Gods has their own symbol, many churches and worshippers will bear the emblem of the United Church, a cross. Each point is meant to represent one of the deities - the top is, of course, Tyaus. The right hand point is Aethon, as the strong arm of the Church, and the left, Vaitera, mysterious but integral. The bottommost point, as a foundation and for representing those at the bottom of society, is humble Gebrick.

Most of the faithful would wear the emblem of their own God, but those acting in the name of the United Church as a whole, such as Crusaders, have been known to wear the cross upon their clothes or surcoats, and as a symbol it is especially common in Andermark.

The Libris Unitas is a book of prayer and scripture commissioned by the Archdeacon Ethelred Dahl during the formation of the United Church. It was created under the goad of bringing together the more concise and clear texts of Tyaus, Aethon, Vaitera and Gebrick so that there would be one volume that encapsulates the goal of the Church in its united for. It contains twelve books overall, each of them editions and revisions of paramount texts. These books include de Cassel's Book of Gebrick, the only successful book of its ilk, and a revision of the conservative yet humble Codex of Cademon. Most commonly written in Imperial Calavrian, it is this text which can be universally found within most parishes and drawn from by most priests for wisdom and guidance.