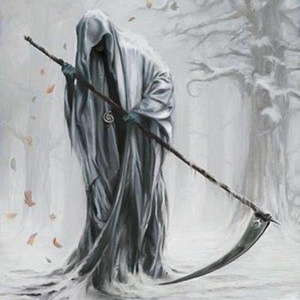 When someone dies, their soul departs from their body and moves to whichever afterlife their actions in life have lead them towards. The wicked are sent towards the roiling chaos of Hell to exist in eternal suffering amongst the demons that are imprisoned their, whereas the righteous are destined for the Heavens, where they will spend the rest of eternity in the paradise of their god's presence. The space between these two realms, the Passages, are an impossible to navigate void of endless, cold grey.

It is the Reaper that guides these souls towards their final destination. The Reaper comes for everyone indiscriminately, supposedly appearing to those who die as a roughly humanoid figure wearing robes of woven night with two tremendous black wings of raven-feathers jutting from its shoulder-blades, wielding a scythe so sharp it can sever a mortal's essence in twain.

Whilst it is not widely believed, some associate the skeletal appearance of the True Nemesis with that of the Reaper, leading for the belief that death itself had become manifest to lay a final judgement down across the world. After the Fall, the Church of Vaitera put out a statement claiming that the Reaper was a force of balance and finality that cannot act out widespread destruction as the True Nemesis had done.

It is the Church of Vaitera that operate most closely to the Reaper's purview in the Realms, Vaitera herself being a goddess of the preservation of life that deals in works such as the Libris Mortis in setting departed souls to rest. However, the Libris Unitas makes very little reference to the Reaper, speaking of it three times within the entire text and referring to it only as 'the Guide'.

Necromancy and The Reaper

The first lesson that any necromancer is taught is that, when tampering with the cycle of life and death, every action one makes draws the attention of the Reaper. Being an entity of the Passages, it is rare that the Reaper make physical manifestations to anyone when there isn't a sufficient connection between the the physical world and the Passages, the kind of which are opened when a soul departs a body. The Reaper rarely 'steps through' from the passages, but it has been sighted by those on their death beds. Generally the Reaper's interests seem to lie within the preservation of the soul rather than the body. The centuries of undead labour within Calavria seems to have gone without visitation from the Reaper.

The ire of the Reaper can be earned by the necromancer that uses their powers flippantly. A few papers and books from budding Calavrian necromancers speak of occasions where they have believed themselves confronted by the Reaper itself, demanding a justification for their tampering with the cycle of life and death. It is worth noting that in each of these accounts the Reaper has been portrayed as being satisfied by their answers, returning to the Passages from whence it came. There are no accounts that denote the Reaper being unsatisfied with an explanation. Stories also tell of the Reaper ageing a mortal by a few years and claiming those lost years for itself, usually as payment of some favour amidst a ritual.