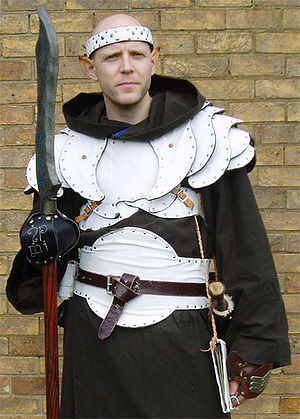 Yanevi is an Arcane mage, specialising in the flows of life-force as part of the field of Vitality magic. He also is a talented weaponsmith, specialising in swords. He is a competant combatant and is never far from his family's ancestral weapon, a spear named 'Celebreth'.

(OC) all information on this page should be considered common knowledge about Yan, to anyone who would take the time to know him. No dark secrets here :)

There is a Pricelist of weapons manufactured.

Yanevi was born in 55 PF, the first (and only) child of Nolias, a low-ranked noble diplomat of the line of Ilora, in the Carnthor region of the Empire.

As his childhood passed, Yanevi was identified as a mage and duly removed to the regional college of magic. There, he learned what he considered a fundamental truth of life. Each student was given a puppy, and these became mascots, companions and part of the college life for the class.

As the students neared the end of thier decade-long studies, the dogs became frail, disappeared mysteriously or simply died.

At the graduation ceremony, every elf there was reminded that even though other things come and go, some with flashes of brilliance, an elf, and by extension the Empire, will endure.

After leaving the arcane academy, Yanevi travelled the Empire as a healer, learning the arts of herbology and metallurgy and the relation of metal and flesh.

As the young elf returned home to begin his life as an advisor to regional government, the first horns of battle against the Legion were being sounded.

As the Legion marched inexorably through Leyroth, Nolias was dispached as part of the diplomatic delegation to open negotiations with the humans. Yanevi stayed at the family estate to make ready for evacuation.

As the elves withdrew from the Empire, the family fell back with the rest of the elves, Yanevi using his skill as a healer to patch up the wounded that had not tasted Legion Metal.

Yanevi's mother was last seen volunteering to help the defense as the flow moved out of Lancereaux. At that time Nolias and Yanevi began training themselves and other able refugees in small unit combat for the inevitable end.

At the final stand, Yanevi and his father stood in the elven ranks to defend the final bastion of life. Nolias was felled along with many others of the unit, but Yanevi was protected as a healer - at the cost of others.

Yanevi lived with 20 other elves in a small merchant compound in Starkholm. He primarily worked as a weaponsmith, being known as a master, and freely gave healing to any who ask (apart from lepers). The income from his forge (Pricelist) was directed toward the advancement of the commune, and he trained many others in marketable skills. During the evenings, he worked with the city watch of Starkholm to provide healing support to the watch and treat those injured in sectarian violence or aggrivated robbery.

As a paid member of the Outriders, he answered almost all hires, believing the reformation of a strong human kingdom to be required before the elves can rebuild theirs. In High Sun 2 AF, shortly after the defence of Wolfsgart, he gifted the sword Estela to the outriders company as a symbol of the company and the hope they bring. He was seen to donate monies from adventuring to elves in the city who are working towards the advancement of elvenkind.

In Winter's End 2 AF, Yanevi lost his right hand in a battle with demonic powers. He crafted a contraption of wood and leather that functionod to hold his hammer or spear to what is left of his arm, and clearly carries the blazon of Tyaus. Some say that his brush with demonkind has left a mark in his mind and that he was insane, others saw a man driven by higher purpose.

In High Sun 3 AF, Yan's hand was re-grown after a month-long period of convalescence. He took great pains to ensure that this process was observed and sanctioned by the church, particularly by Tyaus. He was observed to use the re-growth ritual on gravely wounded members of the armies, and those in Starkholm. It has been noted that the ritual does not have any effect on wounds inflicted by Legion Steel - the limb regrows, but the wounds remain.

In Winter's Stirring 4 AF, after assisting the outriders on a mission to repulse a Yotun advance, he returned visibly shaken, and became more drawn in the following weeks.

In his recluse, he set about perfecting his art, and became a Legendary master smith of Longswords.

After the official opening of Ashenheart Rise, he was visited with a Vision. The gods had decreed that he could forge a weapon of god's Iron to smite demonkind.

His brush with divine fire also invigorated his body, turning it from a gaunt, exhausted elf to a glowing vessel of life energy.