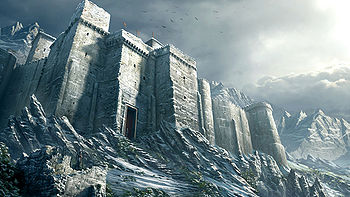 Wolfsgart is a fortified town, the northernmost holding of Andermark, lying in Anderian-held southern Kordurren Mountains. Since the Fall it has also become the cornerstone of the north-eastern defences of reclaimed Andermark, standing strong against Fringe and Yotunaar incursions.

The town was built seven hundred years ago as Andermark established itself as a kingdom in its own right and found itself needing to defend against the Yotunaar, the dwarves, and even their new Damryan neighbours. It is considered a marvel of Anderian architecture, built upon and developed as technology and techniques developed. With a stable population there was no need to extend the walls at the price of defensibility, and as such Wolfsgart has remained strong since it was built, never being taken or destroyed. Its survival against the Legion was a matter of fortune rather than military might, however; the Legion pursued the refugees from Damryn into Andermark, who came through passages to the east, and with the subsequent flight to Starkholm the Legion never reached the walls of Wolfsgart.

For the past two hundred years, Wolfsgart has been ruled by the Markgraafs of Wolfsgart, the line of the Lords Richter. The current Lord is Berthold Richter, a man of advancing years whose son was lost in a skirmish with Yotunaar some six months ago. With no heir but a young daughter, the widowed Lord Richter has reportedly been a lesser presence in and around his town. Rumour has it that Wolfsgart has fallen into some disrepair, with reduced resources, wasted food supplies, and ill-equipped men, but since Wolfsgart has seen nothing more than easily-dispatched Yotunaar aggression - no match for the walls of Wolfsgart - this has been of little concern to the General Staff of the Alliance Army, focused more on fighting the Fringe on the eastern borders.

Although Wolfsgart is a town with a population of only several hundred people, many of the greatest border battles with Damryn and the Yotunaar have been fought here, and it has entered the Anderian consciousness as a symbol of the people's resilience. It might be cold, miserable, and remote - upon a peak so savage that the only way up is on foot, horses and caravans best abandoned at the bottom of the mountain - but Wolfsgart is of deep cultural significance to Andermen.

In late New Sun of 2AF, Wolfsgart became the site of the first recorded international military engagement after The Fall. A force of about 700 Lancesian troops, flying the colors of Queen Valentine, supported by a fire dragon, attempted to storm the walls of Wolfsgart in support of Queen Valentine's claim to be the rightful ruler of the free nations. This action was resisted by the townsfolk of Wolfsgart, led by Lord Richter's daughter, assisted by warriors of the Scar clan of Norlandar and an elite force of Outriders, who rallied the town with the Hope of victory and re-enforcement, and held the gatehouse in the face of draconic assault.