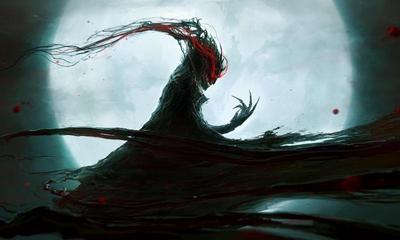 The True Nemesis the Black Omen, the Great Anathema, the Lifebane, the Harbinger of Entropy and He of Blood and Shadow are several names given to the incorporeal apparition that seems to command The Legion. Manifesting as a vaguely skeletal vortex of shadow and blood, the specter usually appears around sites where the Legion are about to battle, be it before the Legion themselves as a commander might, amongst enemy lines or within the walls of a besieged city. Information about the True Nemesis, its nature and its capabilities come from mostly unconfirmed eye-witness reports from survivors of the Fall .

'... At first I didn't know what I was looking at. I was giving orders to the pikemen at the gates, then turned head down to the square where Commander Mancion had set up station, and it just walked out in front of me. It was the size of a man, but gaunt and skeletal. It seemed to be made of smoke and darkness which peeled from its form as flame peels from burning wood. Blood poured from its eyes, whipping backwards as it was caught in the same updraft that disturbed its form, but I swear there was not even a breeze to do such a thing. Its movements were staggered, as if it was constantly wading through invisible brambles that took some effort to pass. Its mouth - its jaw - opened and closed silently as it looked around. There was a pikeman nearby who had backed off to give the thing room. I remember that it looked at him and screamed, then began to dissolve and spiral into something shapeless. The pikeman was caught in the whirling essence of that creature. He didn't get a chance to even cry out. When we got to him, his armour and weapon was rusting and disintegrating where the thing had touched, and there were harsh wounds across his face and chest as if slices of him had been utterly removed...' Yves Whield, Lancesian pikeman. Report from the Battle of Rynnmont, 3rd day of Winter’s End, 8PF