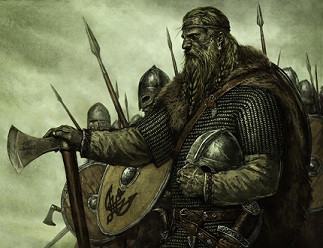 Tewdyr was the first High King of Damryn some six hundred years ago, and some hundred years before the formation of the Realm. He is a historical figure of near-legendary import amongst Damryans, credited with uniting the warring tribes of the land, and the construction of early Caer Brennan.

Tales and records differ on his rise to power and success. The facts above are not disputed by any, but from there the stories become increasingly fanciful. Most stories include, with varying degrees of credulity, his belief that he was a son of the God Aethon, a claim upon which he based his right to the whole of Damryn.

All that can be confirmed is that he cemented Damryn as a united kingdom, and his lineage continued, unbroken, right down to the death of Riagon, the last High King of Damryn, who fell in battle against the Legion.

There are many tales of Tewdyr's rise to power, but the following is considered one of the more mainstream.

Tewdyr was the second son of one of the largest of the six clans of Damryn. His father had been embroiled in conflict for years with his neighbours, and found himself only beginning to try to make bridges of peace. As such, his heir was sent with a peace delegation to negotiate the end to the latest of wars. Tewdyr, mistrusting their enemies, insisted that his elder brother not be sent at alone.

Their father agreed, and the two brothers rode out to the peace negotiations. Tewdyr's suspicions were proven correct as they were set upon in an ambush. Tewdyr's brother was killed, Tewdyr himself injured and forced to flee into the nearby woodlands to escape capture or murder.

But even as he escaped his attackers, he made no effort to make his way back to his home, so great was his shame. Had he argued further with his father, perhaps he would have sent them more guards. Had he fought harder, perhaps his brother would have lived. And if he had not fled, perhaps he would have honourably died alongside him. So he ran into the very heart of the woodlands, losing his armour and weapons along the way in his confusion and his despair, until he came upon the banks of a river and collapsed upon them with exhaustion.

He woke to hear the babbling of the river changing. No more was it just the sound of running water, but something approaching a song, calling him from the depths of his sleep. And as he strained to hear the song better, he could make out words.

It was, Tewdyr would later insist, the voice of Aethon himself come to give him a message. Aethon demanded that he gather himself and stop languishing in his despair. With his brother dead, he was the heir to his tribe, and his father would need him. But Tewdyr's duty went even further than that - for he was more than just another young tribesman, but instead bearing a greater destiny. He was not the son of the Chieftain at all, but the son of Aethon, and he was required to save the Damryan people from themselves. In their bickering and conflict they would find only their own destruction, and Aethon could not bear to look down up the land and see what was happening without taking action.

So he had sent the Damryans Tewdyr, and the young man's destiny demand he return to his home and raise his banners.

Tewdyr at first refused. This could not be Aethon talking, he insisted; it had to be some trick, or his own mind deceiving him. And then, even if it were the truth, he was no man to unite anyone! He had been soundly beaten in battle, and sent off with his tail between his legs. It would be madness for him to lead others in battle. He refused.

Aethon was not accustomed to being refused. Perhaps in wrathful anger, perhaps to teach Tewdyr a lesson, the Lord Resplendent sent forth five wolves from the depths of the forest to set upon the young man. Unarmed and unarmoured, normally he would be no match for such enemies.

But Tewdyr remained desperate. He took up a large rock from the riverbed and wielded it as a weapon, smashing the skulls and jaws of the wolves as they set upon him. And before he knew it, though he bled from his wounds, the wolves lay dead before him, just before he sank back into unconsciousness.

When he awoke it was, this time, to silence. But he was not alone; the corpses of the wolves still littered the ground. And in the depths of the night, with the moonlight shining through the trees and reflecting off the water, they looked changed. Still wolves, still beaten at his feet, but as he turned his head this way and that he could see in their coats the colours of the five rival tribes to his family. He had also awoken rejuvenated - the waters of the river had soaked into his wounds and soothed them. It was as if he had never fought the other tribesmen or the wolves at all, and he felt as if a new strength had sunk into his bones.

The Construction of Caer Brennan

Much of what transpired after that is a matter of enough record to be considered reliable history. It is unclear exactly what occurred in Tewdyr's youth, but everything he did after the death of his brother has been more or less uncontested.

Tewdyr returned to his father, who was overjoyed to learn he had not lost two sons. Now the heir of his tribe, Tewdyr set about making preparations for the great destiny Aethon had planned for him. It would be disrespectful to his father for him to try to undermine his plans, such as the peace process, or to try to rally and marshal and army without his blessing.

His was a new plan. The people of Damryn had previously built their towns and their castles of wood. Tewdyr had seen the stone castles of Lancereaux to the south, and though he found them flimsy, he knew that Damryan architecture and stone would produce something altogether stronger. So he swore, for his father, that he would build them a new, unbeatable fortification.

The site he chose was a hillock, surrounded by enough woodland to aid the construction and provide its own defence, and with a nearby river to ease the shipping of materials. He would only mention years later that he had chosen, as his seat of power, the very site where Aethon had first visited him.

The castle was named Caer Brennan, and was the most ambitious architectural undertaking ever seen in Damryn. Tewdyr had brought in experts from Calavria and Lancereaux, and the result was a huge fortification that was unrivalled in all the land.

His father came to him on the day the last stone was set, by then an old man. The old Chieftain smiled, and said 'My son, you are not yet Chieftain and already you have achieved far more than I have in a whole lifetime. Truly the Gods themselves will stumble before your might and vision.'

The old Chieftain died later that day, of advanced age and a weak heart. The iron torque of leadership was placed around Tewdyr's neck in the halls of Caer Brennan.

The Rise of the High King

His action as Chieftain was swift and decisive. Immediately he declared war on the neighbouring tribe who had murdered his brother, and with a personal skill in battle that inspired all of his troops to giddying heights, brought them down within two years. Another six, and he had the other four major tribes bend the knee before him in deference. The last, which offered surrender instead of battle, he rewarded by taking the Chieftain's daughter as his bride.

From that point the lesser tribes fell quickly. Either they fought and were overwhelmed by the force of Tewdyr's army, or they saw his benevolence to those who surrendered and bent the knee without raising their banners.

Within ten years of Tewdyr's reign, he had brought unity to the splintered and bickering tribes. Damryn was one of the last of the nations of the Realm to be united under one single ruler, but it was immediately the largest of all the human kingdoms. And that the Chieftains of Damryn had long considered themselves equal to the King of Lancereaux or Andermark, stubbornly they insisted that they were Kings in their own right, and could not be ruled simply by another King.

There was discourse of how Tewdyr should style himself. He sat and listened to the implications he be the Emperor of Damryn or other such grandiose ideas, before thanking his advisers and retiring to bed for the night.

Upon awakening, he professed to have had another dream from Aethon, and in the halls of Caer Brennan he was crowned again - this time as the first High King of Damryn.