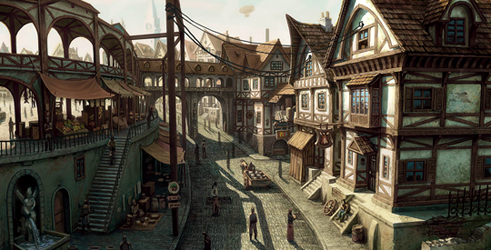 Although Starkholm has historically not been the biggest city in Andermark, the richest, or the most influential, it has always held a significant place in the hearts and minds of Andermen. Nestled in the north-west of the country, it was originally a humble village notable solely for being the birthplace of Erik Stark, the first Chieftain of all of Andermark. As the settlement grew and was founded as a city, the local populace granted it the name 'Starkholm', as a reminder to all that this was the birthplace of the royal line.

Despite this, for most of Andermark's history, Starkholm has been predominantly irrelevant. Cities of the grandeur and size such as Fordheim played a more central role in national events, for they were closer to the heart of Anderian affairs, richer and more influential. Starkholm played a role which was mostly ceremonial until roughly some seventy years before the Fall.

It was Starkholm that Konrad Stark seized control of in the guise of Lord Ravenricht, and there that he made his endeavour to break into Heaven. Starkholm would be the scene of his change of heart and his redemption, and although when he ascended the throne Konrad kept the royal seat at Fordheim, Starkholm received a rejuvenation of attention from the king himself and the Anderian populace after the events that had taken place there.

As the western-most fortification in Andermark before the sea, it was to Starkholm that the survivors of the Alliance of Carnthor fled as the Legion marched on the remnants of civilisation, and it was at Starkholm that the Last Stand took place. This was the site of the Legion's final defeat, and the end of the war.

In the aftermath of the war, Starkholm has become not the heart solely of Andermark, but of the refugees of all of the Alliance. Life in Starkholm now is very different to how it was before the war, or over the previous six hundred years, and the city itself is all but unrecognisable in populace, architecture, and culture.