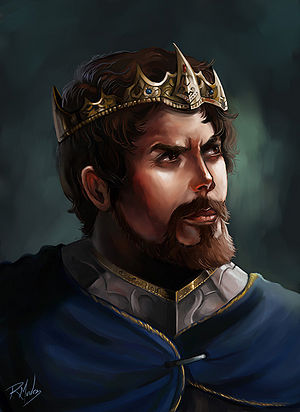 Renier Guihard, the Dragonslayer, was the first King of Lancereaux and founder of the royal line. He rose to prominence after successfully defeating the draconic threat that faced his homeland.

A decade of temperate winters had extended the mating periods of dragons in Lancereaux for years, resulting in a sudden abundance of now-adolescent hatchlings. Consequentially finding the north-western mountainsides to be providing insufficient food for their numbers, they swept down upon the soft lands of the valleys of Lancereaux, for the food that could not fight back.

First it was just sheep and cattle that were targeted by the beasts, until King Quentin Theroux gathered a host of men and rode out to combat the dragon marauding his lands. The King was promptly eaten, as were many of his men, and the survivors fled to tell the story far and wide. Low intelligence of the dragons and their limited communication abilities did not prevent it from being only a short time before the creatures all demonstrated a taste for human flesh.

It was King Renier Guihard who put a stop to this. He was a cunning man, and observed the hunting habits of the dragons, hiding many of his cattle but leaving enough out that he could study the creatures' tendencies. Through this he devised a scheme to incapacitate one enough that it could be killed; a great chain was made, the width of a man's arm, and tethered to a huge oak in a cattle field. At the other end was a vicious hook, which was to be shoved deeply inside a cattle carcass.

King Renier was rather fond of fishing.

Before skewering the cow, he hid all of his cattle in barns and caves for several days, enough to have the farmers protesting and the dragon hungering. Then he took the largest and fattest cow and embedded the hook within it, leaving it in the middle of a field to die. With his finest warriors he hid in the field for three days and three nights, waiting for the dragon to descend. Eventually the creature, as he had observed, became so hungry it would scavenge instead of hunt, and it came upon the cow, swallowing it in one bite.

The creature gave a roar of outrage and pain, such that several of Renier's royal guard fled just at the sound of its fury. But the King himself led the charge, and the remaining loyal soldiers joined him. The dragon was pained and thrashing and so dangerous, but much less calculating in its defences, and so the men began to successfully set upon it.

Then the creature attempted to take flight. The hook and chain were enough to stop it from fleeing, but it remained still tens of feet up in the air, tethered by the mouth to the huge oak, which creaked and groaned from the effort. Renier called for archers, but the arrows bounced off the hide like rocks, and so the King saw only one way forward.

He scaled the tree, and then the giant chain, as the dragon thrashed and injured itself yet more trying to escape the hook. And high in the sky the two battled, until Renier clambered onto the dragon's face and plunged his sword through its eye. Only by clinging to the body of the falling dragon did he survive the drop, much to the astonishment of his men, who dragged his battered form away from the carcass. But regardless of injury, King Renier had just done the impossible: Slain a dragon.

Word spread far and wide of this deed as Renier recovered, and by the time he was well enough to don his armour again, he found dozens of men before his castles. Other Kings seeking an audience and his help, knights desperate to swear oaths in his service. A capable politicians as well as a cunning and powerful warrior, Renier met with all of his neighbouring Kings and assured them that, together, they could bring the draconic threat to an end.

Of the knights, he accepted only the best and the brightest into his service, banding them together to form the Order of the Chained Oak - a knightly order of dragonslayers.

King Renier and his knights rode across the land, studying the different kinds of dragons and devising various means to combat them. He was fond of his tactics of bait, but prepared to adapt his methods once the dragon was constrained. One he lured into a cave, before releasing loosened rocks across the entrance and trapping it. Another he tethered down in a field of dried brambles before setting fire to the lot of it. A third he tethered to a heavy raft in the middle of a lake, which he then burdened with so many weights from other boats that both raft and dragon were dragged down under the waters.

And at least a dozen he killed up close with his sword.

Of the kings whose lands he had freed of a brutal menace, he asked for nothing more than fair trade agreements and peace. For this, and his deeds, after five years of hunting dragons his was the most respected name in Lancereaux. By then the dragon menace was named to be contained, and while many knights stayed in his service, several of the Order returned to their homes to retire - and protect them from future draconic threats. Smaller branches of the Chained Oak would spring up in the different regions of Lancereaux, all originating from one of the original members.

The King of All Lancereaux

Peace reigned for a year or so, and it was an unprecedented era of prosperity for Lancesians, closer than ever before. But rumblings came from the east in the form of the death-throes of the old Calavrian kingdom. Respect for Renier remained such that when he called for a Kings' Council to discuss this threat, there was not a single King of Lancereaux who refused this call.

Renier made an impassioned speech at the Council insisting that the Lancesians had come far, further than any other civilised humans, in their unity and their honour. His proposal was simple - a formalising of this Council, so that the people might be more united, and stronger, for the Calavria to the east made it clear that the dragons would not be the last threat.

He was disheartened when the kings said such a Council could not work. Then they elaborated that it would need one strong, clear voice at the head and, as one, the kings stood before Renier Guihard, bent their knees, and swore allegiance to him as the first king of all of Lancereaux.