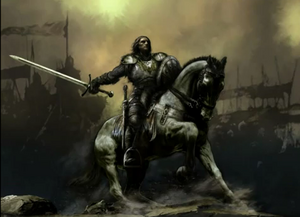 Prince Mathias Stark was the eldest son of King Constantin I and his wife Tanja and heir to the throne of Andermark. At a young age he was launched into a position of responsibility when his father answered the call of High King Riagon to bring men and defences to the Iron Empire upon the signing of the Treaty of Carnthor, though the bulk of the Anderian forces did not cross the Narrow Sea before the Empire fell. Nevertheless, King Constantin spent years in the field while young Mathias ruled by in his stead.

When Lancereaux fell to the Legion and the first spate of refugees began flooding Andermark, King Constantin and most of the Anderian forces returned to their border to defend against the onslaught. Prince Mathias assumed command of the Anderian armies in the field, and he and his forces protected the flight of many refugees as the Legion hunted them. His military achievements and role in safeguarding survivors made him immensely popular, not just amongst Andermen but amongst all refugees, especially as his father weakened under the strain of his kingdom's suffering - and the death of his wife. Mathias' determination kept faith in the Stark line, and Andermark as a whole, stable.

As all kingdoms but Andermark fell and the survivors were forced back to Starkholm, it was Mathias, not his father, who stood foremost for Andermark - and consequentially, all of the Alliance. It was he who rallied the troops for one final defence, and it is said he and his father argued bitterly on the eve of battle over the role the Starks would play. Constantin reputedly wanted the royal family to remain within the walls, while Mathias argued it was his duty to fight and, if needs be, die alongside his men. The story goes that Constantin outright forbade Mathias from leaving, but his son ignored his edict and left for battle anyway, taking with him the sword of the Stark kings that had been crafted by Konrad IV from the bone of the Woodsie Lord, the enemy of Erik Stark.

Mathias led the united armies of the Alliance at the Last Stand of Starkholm, where he personally charged the line of Legion soldiers and made for their commander, the dreaded True Nemesis. He destroyed the creature with the legendary blade, but before the Nemesis fully perished, it made one last swing, which cut Prince Mathias' head from his shoulders.

The day would be won by Mathias' use of the blade. Only scholars of the history of the sword have identified exactly what happened next. Konrad Stark originally harnessed the innate power of the weapon to use it as a means of opening a doorway to Heaven, the realm of the Gods. When Mathias killed the True Nemesis, he utilised this power, allowing the Gods to directly manifest on Ereda, in the middle of the battlefield. It is unknown if Mathias knew that this would happen, or even if it was possible, though it is known he spent all of the night before the battle in the Cathedral of Tyaus, deep in prayer. Regardless, with his death he did more than simply kill the True Nemesis - he brought the Gods themselves down to eradicate the Legion, and consequentially saved all of humanity.

This detail, of how the sword brought down the Gods, is not widely known, King Constantin having proven loath for all and sundry to know the powers of the relic of the Stark line. As such, Mathias is not given as much credit by society as he perhaps deserves. But he has still been hailed as a hero for his courageous defiance of the Legion, and for his defeat of the True Nemesis. He has been seen as a martyr by Andermen and foreigners alike, and the memory of him only hangs the more heavily over his father. Not only has King Constantin been left devastated by the loss of his son, but it is also impossible for the populace to not draw unfavourable comparisons between father and son.

It is unlikely that Mathias Stark will go down in history as any less of a hero than his ancestors Konrad or Erik, first and foremost amongst the line of kings.