The Legion is the given name of a terrible force that swept across the Iron Empire and the Realms, enacting the Fall and destroying most of civilisation as it was known. The Legion had no desire to conquer. The Legion took no territory and sought only destruction. They were an impossibly vast and seemingly endless onslaught of troops that marched their terrible campaign across the Iron Empire and the Realm.

They were by no means a mindless force. They communicated between themselves in a dark tongue that bared no resemblance to any other spoken language and, worse, there are reports of them speaking the common tongue. The Legion fought tactically, their methodical stage-by-stage eradication of the Realm suggesting sharp calculation and intricate knowledge of each and every nation, the lay of the land and the forces they would meet.

There was a modicum of hope that came with the realisation that they had no spellcasters or ranged weaponry, a situation that allowed for several sieges to buy the people of the Realm more time to muster forces and attempt retaliatory attacks. But even in those rare cases of the field of battle being won by the defenders, within the hour there would come another sighting of a battalion of the Legion on the horizon. 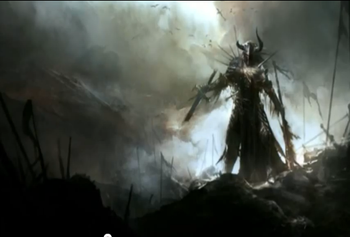 The bulk force of The Legion, the legionaries were uniformly 6’ 5” in height and every inch of them garbed with horned helms baring only narrow slits for vision, dull black mail and matted plate armour, all of it articulated in such a manner as to not yield even a glimpse of flesh. The plate itself seared those that touched it with naked flesh burns that could not be cured by mundane, alchemical or divine healing. The claymores they carried were made of that same dull metal, the hilt a simple but brutal affair with outward-jutting spikes on the cross-guard and the pommel of the blade. They pack a brutal strength behind their swings, their armour is almost impregnable by conventional weaponry, and when they have engaged in a battle they have been known to display incredible swiftness regardless of the encumberment of their armour.

In the nineteen years between the Legion’s first sighting by the Iron Empire and the Last Battle of Starkholm there have been no reports of anyone seeing the face behind those helms. There are however numerous reports of glimpses of the flesh under the metal. They seem to wear no padding between their armour and their skin save for thin yet sturdy black leather under their chain. Their flesh is reported to be a deathly white, devoid of hair or blemish of any kind save for the thick black veins that run under it. Their blood is a darker crimson than any other race’s blood.

Legionaries usually marched in strict and faultless battalions, keeping apace of each other across all terrain regardless of obstacles. Between them and the assimilated, the legionaries are more likely to speak their unearthly tongue. They seem to posses some unspoken control over the assimilated, capable of communicating orders to them with a simple gesture.

The name given to the metal that the Legions had shaped into their armaments and weaponry, Legion Steel burns the flesh of those that touch it to an incurable and horrific degree, supposed to burn hotter than bare flame. Very few people have endeavoured to experiment with Legion Steel, though there are various sites of battle where the armour and blades of the Legion remain, strewn about as they had fallen, unmoving and unrusting. It is notoriously difficult to penetrate and cannot be smelted by conventional forges.

The assimilated are mortals turned by a corrupting ritual preformed by a Legionnaire. During this ritual, a Legionnaire will make the mortal (willing or unwilling) kneel before them, facing away. They will rest their heavy gauntlet on the head of the individual. The searing pain of Legion steel will see them screaming in agony, and as they do their arteries will become more pronounced, black viens crawling their way from the head downwards. Their skin will also become pale, their eyes will darken until they are completely black, and when the legionnaire removes their hand, the mortal will have been completely assimilated.

The ritual grants the assimilated supernatural strength and speed, the capacity to wear armaments and weild arm made of Legion metal, and strips them of their former identity. They seem to retain the memories of their former existence, but their loyalties seem to have been entirely re-written. The assimilated live for the Legion and the destruction of all things.

It is uncommon to find individuals who have survived the Fall and seen someone close to them assimilated. Assimilation usually happens to a group of captives once a populated area has fallen, though there have been cases where legionaries have carried out assimilation in the middle of a battlefield. The assimilated are capable of communicating, but do not taunt or goad those they encounter. Rather they coldly speak only of indiscriminate death and destruction.

A great deal remains unconfirmed about the assimilated, most notable the question of if the process is reversible. There have been very few opportunities to attempt to heal the assimilated through alchemical or divine methods, but those few have yielded no positive results. It is also unknown as to how legionaries decide who will or will not be assimilated other than the rough estimation of it being one in every ten captors. All other prisoners are usually put to death.

(See main article) The True Nemesis is one of several names given to the apparition that seems to command The Legion. Manifesting as a vaguely skeletal vortex of shadow and blood, the specter usually appears around sites where the Legion are about to battle, be it before the Legion themselves as a commander might, amongst enemy lines or within the walls of a besieged city. Information about the True Nemesis, its nature and its capabilities come from mostly unconfirmed eye-witness reports from survivors of the Fall.