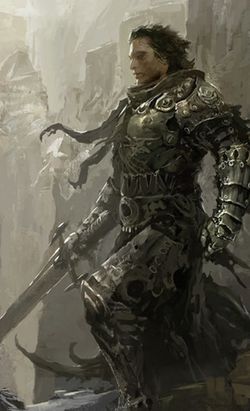 The most important story in Anderian history is not the story of Erik Stark’s defeat of Lord Woodsie and his uniting of the nation. Seventy years before the Fall, the tale of another Stark took precedence, and would shape Anderian society forever.

Years before, Sahradian raiders on the Ibarran mainland waylaid a convoy of the Queen of Andermark and the youngest son of the royal household, en route to diplomatic talks in Santhiago, and both were assumed murdered. The kingdom grieved, and great repercussions befell the Sahradians, but life went on for another thirty years before the full ramifications of this were felt.

Starkholm was seized by Lord Ravenricht, a mysterious figure who had come into local politics over the previous years until he had ascended to the position of Mayor - at which point he effectively shut down the city. For days nobody heard from inside at all, until word got out that he was intending on using the Cathedral of Tyaus itself as the focal point of a huge and dangerous magical ritual to rip into heaven itself.

Forth would step a mercenary company renowned for their great deeds, headed by the heir to the throne of Andermark, Sir Tancred Stark. They would reveal Ravenricht to have been a former compatriot of theirs who had left after internal disagreements, and whom they considered highly dangerous and had been hunting for years. His identity as Ravenricht had been suspected, though could never have been proven, but now they were convinced they had the means to break into Starkholm and stop him.

Konrad as 'Shaghal' the mercenary

It had all the makings of a classic tale of good triumphing over evil had this been the extent of the facts. The details would not come out until the dust settled. Lord Ravenricht was, it would transpire, none other than Konrad Stark, the youngest son presumed killed by Sahradians, who had been taken as a slave until making it back to Andermark as an adult and falling in with Tancred’s mercenary company. For years unaware of his heritage, his upbringing in the cruel world of Sahradia, where survival trumped all, had honed him into not only being a superb warrior and an intelligent man, but also desperate and cruel when it suited his purposes. The tale even sported a story of thwarted love, as the unknown brothers competed for the love of the priestess Alannah of Damryn - and it had been Tancred’s winning of her affections that had driven Konrad from the mercenary company.

Konrad Stark had only learned of his heritage after parting ways with his brother. This would result in an even further souring of his mind, the brilliant man already twisted by his losses and his experiences. The world was a cruel and dark place, he determined, and required rectifying with a strong hand. His goal was simple, but ambitious: To break into heaven and kill the Gods themselves.

War on the Gods

Technically it was not possible if one entered heaven by any of the known ways. Thus did Konrad Stark decide to break the rules. He broke into the royal palace in Fordheim, and stole the arm of the Woodsie Lord his ancestor had used to save Andermark, for his studies and research over the years had revealed to him its power. For the first time, the raw power in such a thing was harnessed as he carved it into a sword, a sword he would use to literally cut into heaven, and to kill the Gods.

Had it not been for Tancred and his other old mercenary companions, he might have succeeded. But they did not stop him in any way anticipated. Konrad was not alone in his desperation; his brother knew not of their shared heritage, but they had been rivals for years, and though he believed he had won Alannah’s affections the continued competition had soured and embittered him and driven him to a deep, obsessive jealousy. To take down Lord Ravenricht, he was prepared to use any means. Their rivalry blinding him to sense, and deeply fearful of his old compatriot’s power, Tancred Stark went so far as to make a deal with a Demon Lord, a direct lieutenant of the God Chernobog for aid to defeat him.

The Lord asked for little, and Tancred ought to have been suspicious of this. But he did not realise the depths of his mistake until he and his compatriots, most of whom knew nothing of the dark pact, faced off against Konrad Stark in the highest tower of the Cathedral of Tyaus. Outraged at their arrival, Konrad taunted his brother with the revelation of their heritage - before completing his ritual and carving through reality a gateway to heaven.

Before he could step through, Tancred summoned his dark allies, and the demons made their move. It suited them intensely to aid Tancred for little, for he could bring them to a place where a direct entrance to heaven itself was. If they brought their dark legions through, this could result in a literal war in heaven, one the Gods were not guaranteed to win when their defences were broken through. Tancred was not well-versed enough in theology or the laws of Gods and Demons enough to understand this.

Turn of the Tide

But Konrad had studied these intently, and the moment he saw what his brother had done his blood ran cold. For his intentions, although dangerous and egotistical, were nevertheless for what he perceived as the ‘good’ of the world - and the demons would, if they broke into heaven, bring down only destruction.

He bade Alannah, priestess of Tyaus, who was horrified at what Tancred had done, to pray in the hopes that in this place, at this time, she might be heard and could thus warn the Gods of the rift Konrad had worked so hard to keep from their notice. Then he took up the sword he would have used to kill the Gods, and marched into combat with the Demon Lord.

Eventually, the Gods heard and reached down to close the Rift. Eventually, Tancred Stark saw the error of his ways, and charged in to join his brother in battle, earning the time needed but at the cost of his own life. And eventually, Konrad Stark plunged his blade into the heart of the Demon Lord and destroyed him forever, something no mortal could have done without the power of the relic of Woodsie.

The heroes had almost caused the victory of the demons in heaven. The villain had saved the world and now found himself the heir to the throne of Andermark.

The Fate of Konrad Stark

It was not a tale that would draw much attention across the Realm; the details seemed fanciful, although scholars would confirm they were all feasible with the right knowledge and tools, even if one had to dredge through obscure theological sources to find these out. But the tale of Konrad Stark, now the King himself, became perhaps the most important in the country’s history.

His choices had defined him even over his experiences, the storytellers would say. He had suffered greatly in his youth, first as a slave, then on the streets of Kadrasalem, and then finally in the fighting pits across Sahradia until he had escaped to make his way to the Realm. These experiences had hardened and strengthened him, yes, but embittered him until he had gone down the dark path to seeking to destroy heaven itself for the wrongs the world had done him. And yet, at the last moment, when there had been no reason for him to do anything but revel in the consequences of his despised brother’s actions damning him, Konrad Stark had stood firm and done the right thing, risking his life and very soul.

It was true that the experience had humbled him. Perhaps it was how close he had come to bringing true harm upon the world, perhaps he had glimpsed something when the Gods had closed the gateway to heaven, or in the heart of the Demon Lord he had slain. Perhaps it was something as naive as the love of Alannah, who had consented to be his Queen, that had brought out the good in him. But he would be a changed man, still intent on undoing the wrongs in the world, but doing so as King of Andermark, brilliant, but thoughtful.

The Legacy of Konrad Stark

This would seep into the Anderian subconscious. One’s past experiences, or even past deeds, are not as important as the actions a man takes in the now. Redemption can be found for even the coldest of villains if they are prepared to make the necessary sacrifices to do good. Konrad Stark had seen every reason in his life to bring the Gods to their knees, and had ultimately saved the world; privileged Tancred Stark, on the other hand, had almost ended the world through a petty rivalry he had for all intents and purposes ‘won’. Though even the dead brother is viewed with forgiveness in history and in many versions of the tale, for even he saw the error of his ways, and gave his life trying to undo the evil he had wrought.

It is a tale even more powerful after the Fall. Many dark deeds were performed in the name of saving lives; many people with sketchy pasts find themselves in positions of responsibility and authority. But these pasts are not as important as what people do now, at this most important of times.

His legacy is perhaps even more tangibly important, however, for his great-grandson Prince Mathias showed much of his mettle when he marched into battle in the Last Stand of Starkholm and plunged his blade into the True Nemesis’ heart to open the gateway to the Gods and their salvation.

That blade he bore was the blade of Konrad Stark, the blade he would have used to break into heaven himself - the blade crafted from the arm of the Woodsie Lord, claimed by their ancestor almost a thousand years ago, a humble woodsman named Erik.