The the survivors of Caer Brennan are ruled by High King Riagon and his Council. 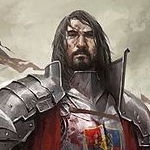 'I swear, I will reunite the Realms.'

Riagon, head of the Damryn State and claimant of the title of High King of the Realms, is a tall man of broad shoulder, dark hair and severe expression. He is known by his followers to be a fair leader, dauntless in his drive to protect the survivors of the The Fall. It was he that formed the Alliance of Carnthor, the treaty signed on ground that man and elf had historically fought for, uniting them in their efforts to overcome the Legion. During The Fall Riagon was thought to have perished at Caer Brennan leading a suicidal charge against Legion forces with his Royal Guard.

Rather than slaughtering them, the Legion incarcerated the High King, the Royal Guard and what civilians of Caer Brennan they could round up. Cellars and homes were crudely fashioned into holding cells in which the High King and his followers would be detailed for nearly a year. Then came the fateful day where the Legion were weakened and the High King and his Royal Guard took the fights to the streets of the city, breaking out those he could and felling Legionaries where they stood.

'There will be order, and I will see it done.' 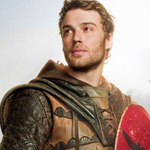 'The High King will entertain peace before war, but he is proficient in both.'