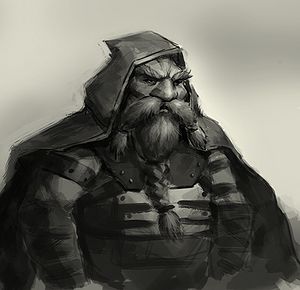 Garik Firebrand Stronghammer (full title Garik Firebrand of the Clan Stronghammer of the Kith of Kordurran) is a Dwarven mage and armourer. Originally from the Dwarven city of Baradzhur, Garik left the stronghold of his people to try and escape the memories of the horrors of the Fall. Heading for the human nation of Andermark, he was forced to offer his services as an armourer to locals of the area. His skill at smithing and his magical affinity quickly built him a reputation that drew the attention of the Outriders of Andermark, who hired him to maintain the armour of their people.

Born 52BF, Garik was a member of Clan Stronghammer, a reknowned clan of Dwarven smiths. As smiths, the Stronghammers fell into the Dwarf laymen class that was emerging as the Dwarves traded their goods with the other races. The skill of their smiths was so great that their weapons and armour were held in high regard by the noble class. While not wealthy enough to become nobles themselves, the Stronghammers were among the more prosperous of the workers, and held much respect from their working-class peers from their devout following of the philosophies of Dredden Stonehelm. Garik spent much of his early life training as an apprentice smith from various members of the family. As he moved into his teens, Garik's magical affinity began to manifest, and he was sent by his father to train with the Dwarven mages. Unsurprisingly given his heritage, Garik was found to be very connected with the elemental magic of fire, and was taught the Arcane art of channeling his spells. As an apprentice, he proved to be very studious following his physical childhood, a trait that would continue through his later life.

After completeing his training, Garik returned to the forges where his family worked, utilising his magical skills to maintain the forges as he began to learn the art of Armoursmithing. When he came of age, he chose the name "Firebrand", as the dwarf had started magically branding his armour with an adapted Dwarf sigil for fire as a signiture of his manifacture.

Cerca 4BF, Garik was conscripted to assist the military to fight the Yotunaar that were invading from the depths on the Endless Gulfs. While brought primarily as a field smith, his magical ability was called upon several times as he was forced to participate in several skirmishes.

Upon returning from the battles, Garik left the military, but his reputation meant he often dealt with the traders and minor nobles to whom clan Stronghammer sold their wares. It was at this time he was introduced to Rowena Ironwill, a family that has risen to a lesser status of nobility off the back of the trade routes outside of the Dwarven realms. They fell in love, and after the traditionally long Dwarven courtship were engaged to be married.

When news of the impending Legion forces reached Kordurren, Garik's fiancee, Rowena Ironwill, had left the City with a trade caravan that morning. He made his way to the gates to help prepare the defenses against the Legion. He arrived in time to see their armies sweeping over the foothills into the valley, the caravan and people of the valley fleeing before them, as the militia were already closing the gates. Garik fought the guards to stop them, but was overpowered, and had to watch in horror as the guards shut the gates.

Watching the military's part in the death of innocent lives, the loss of his beloved Rowena and news of Stronghelm's failure to appear at the last battle shattered Garik. Without his love or his faith, he was lost. He buried himself in work but continued to be plagued by the events of the past. Garik left Kordurren, hoping to leave the memories that haunted him, and began to roam the surrounding areas and eventually strayed into Andermark, witnessing first-hand the devastation the Legion had wrought. The following months were something of a blur, as the distraught dwarf drank away his sorrows and roamed the northern villages of Andermark. Lost and without coin, he began to take up odd jobs as a scholar, arcanist, and eventually smith, at a village on the western edge of the forests. His skills at the forge raised the attention of the Outriders, who hired him to be their armoursmith. Garik returned with them to Starkholm, where he remains to this day.

Garik has found a new lease of life working with the Outriders, giving his life a vague sense of purpose once again. While primarily there as a smith, Garik has began taking up his arcane studies once more. While skilled at his craft, the dwarf has a great interest in scholarly research and arcane understanding.

Provided nothing reminds him of death of his fiancee, Garik remains fairly optimistic of his new lifestyle. However, every so often, this facade will be broken, and he will begin to drink his sorrows away once more. When this happens, he reminices often over Rowena, signs up for the next available venture of the Outriders imagining death-or-glory charges, and wakes up with a terrible hangover with barely any memory of the event until the summons comes.

52PF - Is born to Draven and Kira Stronghammer.

42PF - Begins to assist his family in the forges.

37PF - Affinity for fire magic is discovered in Garik. Is pressed to train in the Arcane arts by his father.

28PF - Completes his training under the Dwarven arcane masters and is recognised as a mage. Returns to his apprenticeship as a smith, forging with the help of arcane fire.

27PF - Comes of age. As a part of the ceremony, adopts the name 'Firebrand' and begins marking all his work with a sigil of flames.

23PF - Completes his apprenticeship as a smith. Begins to work alongside the rest of his family in their established forges in Baradzhur.

4PF - Is conscripted into the military when Yotunaar are discovered by the Endless Gulf. Fights in several skirmishes.

3PF - Returns to Baradzhur and resumes work at the Stronghammer forges. While developing merchant trade to Damryn, meets Rowena Ironwill. Falls in love.

1PF - Announces his intent to marry Rowena to her father, Kornac Ironwill, a successful merchant.

0PF - Sees Rowena killed in the fall. Loses all faith in Stonehelm and the Dwarven military, the new reigning power. Leaves Baradzhur and the Kordurren range.

1PF - Strays into Andermark. Takes up jobs to make money to live. Eventually becomes a smith on the western edge of the Fringe.

2PF - Gains reknown in the local area for producing armour of fine quality. Is recruited by the Outriders to maintain their force.

2PF - After several excursions with the Outriders, assumes duties at their base in Starkholm as full time smith.

3PF - Produces incomparable armour for the victors of the Outriders Tournament.