High King Donan was the son of Bairne, the Damryan king who conquered Lancereaux and began the formation of the Realm. A more cunning politician and economist than any of the Damryan High Kings thus far, Donan was the first King of Damryn to apply his nation's famed determination and cunning to bear on matters other than the military. Despite, or because of this, Donan completed the unification of the 'civilised' nations of humanity, bringing Andermark and Calavria into the Realm. 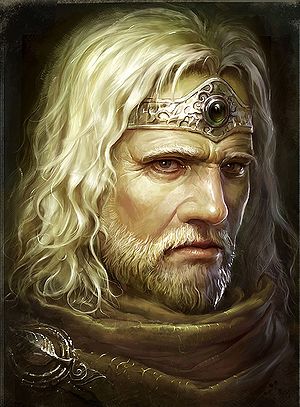 Donan was not the military mind his father was, and he knew it. He was a much more competent politician, however, and likely would have endeavoured to play to these strengths if he had been given the chance. Unfortunately for Donan, he came to the throne of Damryn at a time when his father Bairne had been making significant efforts to catalyse a war with Andermark.

Donan recognised that the Damryan regard for strength and the need for a warrior king meant he would have been in a tough situation had his first act as King been to appease the Andermen and try to bring about peace. Additionally, it had not simply been warmongering that had driven Bairne west, but knowledge that Andermark had been on the verge of aiding Lancereaux in the war, and a concern that the Andermen might still lend aid to anti-Damryan, anti-Delacroix rebellious elements in the kingdom. Something needed to be done about Andermark, and Bairne had already cast the dice with a bet placed on war.

It was still seen as a surprise, however, when Donan dealt with the issue by immediate invasion. The suddenness of his strike took the Andermen, who had hoped for a more peaceful accord with the new king, by surprise. Andermark had also historically relied upon its thick woodlands for defence, as well as the territorialism of the Fringe-warped creatures often playing to their advantage against unwise foreigners. But Donan dealt with this by bringing in Damryan troops who were accustomed to fighting Demonblooded foes in the deepest forests of his homeland to take the vanguard of the invasion force. Damryans were not as easily deterred from warfare in Andermark as superstitious Lancesian levies had been.

Donan made straight for Fordheim, the capital of Andermark. Historians suggest that politically-savvy Donan had no desire for a great, drawn-out campaign that would please his people, but rather intended on striking hard and fast against Andermark and forcing them to beg for peace. This would have to appease his detractors at home, for nobody could argue with victory, without over-extending himself.

The tactic both failed and succeeded. A slower and more cautious advance through Andermark could have allowed the Damryan army to tie up more of the Anderian forces, and deny them the opportunity to retreat as one, which is what they did. King Torsten Stark of Andermark, instead of being chased further westwards as the Damryans had expected, gathered his forces with ease, held his ground at Fordheim, and settled in for a siege. This would deny Donan the quick and cheap victory he had hoped for, and the Andermen seemed disinclined to surrender. On the other hand, without reinforcements coming to drive off the Damryan invaders it was simply a matter of time until Fordheim fell.

And time it was. Two months of a heavy siege followed, siege warfare which was previously not especially well-known to the Damryans. Donan developed much of early Damryan siege warfare, but this was a style of war the Andermen had perfected through centuries, and Fordheim was built perhaps more solidly than any fortification on the continent. The combat was slow, hard, and expensive, in terms of resources and manpower, and even though the Andermen had to be suffering worse and would ultimately lose, the Damryan army realised that there would be no swift, glorious victory.

Donan had initially rejected Torsten's first call for a parlay, as the terms offered had been unacceptable to him - he did not just want to be paid to go home, he needed to end the Andermark threat forever. But after two months of siege warfare, he was prepared to listen to the other king yet again. Keen to be able to speak freely with the Anderian ruler, who had won much respect on both sides of the battlefield from his successful defence, Donan rode out to meet Torsten in the open land beyond Fordheim's walls. Both men were alone.

Neither wrote the details of what occurred between them, though they spoke at length. Damryan silence turned to victorious cheering when Torsten descended from his horse, removed his crown from his head, and knelt in the mud before the mounted figure of High King Donan. But in what was likely a pre-arranged move, Donan dismounted and picked up the crown of Andermark, only to place it again upon King Torsten's head. The two men shook hands again this time as equals. Andermark had surrendered and brought itself under Damryan rule - but as a client kingdom, still ruled by the line of Starks on behalf of the High King, and with their pride considerably more intact than the Lancesians'.

Historians have never agreed as to whether this was what Donan wanted or not. His detractors say his unsophisticated advance did not disrupt the Anderian lines of communication sufficiently, and allowed them to pull back to their own stronghold and force the Damryans to pay a higher price than they would otherwise have had to: in manpower, and in political might. A more lengthy campaign encircling and diminishing the Anderian forces would have made a siege at Fordheim far less effective for the Andermen, and consequentially Donan could have not just brought Andermark into the new Realm, but could have put a puppet ruler in place just as his father did for Lancereaux.

His supporters suggest Donan did not ultimately want a puppet ruler. Bairne had left Lancereaux smarting; the nation's pride was wounded, they hated Damryn for invading, and they distrusted their own leader for murdering his king and colluding with the enemy. It was a country rife for rebellion, and although later Damryan kings and Lancesian counts would appease them, at the time Donan feared an uprising. Although Donan's hopes for a quick charge that would give him the advantage in any Anderian treaty negotiations were dashed, he nevertheless adapted to the siege of Fordheim. He pressed for a surrender where Damryn still benefited economically and politically from Andermark's subservience just as much as it had benefitted from Lancereaux's. The only difference was in what their ruler called himself, and in allowing the Andermen to keep their much-loved royal line, he averted their ire. Doing so, and the means by which he did so in the display before Fordheim, also treated the Andermen with respect as equals, and gave them less wounded pride to use as a motivation to rebel.

But nevertheless, Donan's campaign in Andermark was still his father's legacy. A much clearer picture of Donan's methods and preferences can be seen by how he handled the incorporation of Calavria into the Realm. This was a plan he had been putting into action since before his ascension to the throne, for as Crown Prince to Bairne he had been free to influence economic policy as he saw fit. And when Damryn controlled both Andermark and Lancereaux, he could influence all of Calavria's trade with civilised humanity. Sanctions placed on international imports prompted more and more Calavrian businessmen to move their businesses out of Antinori and into Lancereaux or Damryn, for trade with the Iron Empire alone was insufficient, and trade with goblin-occupied Ibarran was all but impossible. Donan had no desire to send his armies against the mercenaries of Calavria, who were better-disciplined than Lancesian levies and better-equipped than Anderian soldiers.

It would prove the work of a lifetime to bring Calavria to heel, and Donan did so after decades of trade agreements and negotiations. He was an old man by the time Calavria finally accepted that becoming a client state of Damryn, with all of the economic benefits and trade taxation cuts this would bring, was the best and most effective move. But nevertheless, Donan had finished the work of his father: there no longer stood a human king who did not bend the knee at Caer Brennan. The chieftains of Norlundar and the conquered humans of occupied Ibarran would prove matters for his descendants.