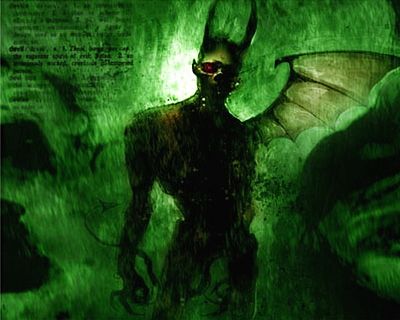 The Gods are eternal beings who created Ereda, in their enduring wisdom and timeless plan. It is known, however, that the world was made out of something, which theologians assume to be a shapeless nothing that was given form and purpose. Most of this nothing was transformed to have a purpose, and light, and colour, and was made a part of the world, but there were ever scraps and dregs; pieces that were flawed or simply useless. When the world was made, the Gods cast these pieces out, where their imperfections could not taint this creation.

These pieces were, or would become, demons, as the Churches of Ereda would teach people. Entities of great malevolence, power, and cunning, they feel spurned by the Gods for having no place in their creation, and thus set about to corrupt and destroy it in their bitterness and hate. Their exile was rapidly defined as an imprisonment, the Gods forming the roiling chaos of Hell to detain them within. Its torment was intended to distract and occupy these beings, who had resisted all efforts at being changed or destroyed, so they could not be a threat to Ereda.

But, sometimes, they get through.

Demons rely upon manipulation, first and foremost. If a mortal willingly accepts their help, they can prey upon that first acceptance to twist the boundaries between Hell and Ereda. Once a demon has their claws in a mortal they are particularly adept at getting whatever they want out of them. It is very, very rare for a demon to physically manifest in the world, and the most common display of their interference is possession of a mortal, or a mortal being corrupted enough to do their bidding. They can offer great power, and thus tend to prey upon the dregs of societies who find themselves desperate, and generally caring less about the heresy that is dealing with demons.

All churches teach that demons are evil, accursed beings who should be thwarted or destroyed whenever possible. The sole exception to this is considered a cautionary tale by other religions: that of the God Chernobog, who was jealous of the greatness of his brother Tyaus the Guardian, and corrupted until he was drawn into Hell. This fall granted demons a great amount of power, influence, and a leadership they had been previously lacking.

Thus worshippers of Chernobog and those who deal with demons operate in the utmost secrecy. They may band together for safety in numbers and to share their knowledge, but this ever proves a risky business. Whatever their original intent, the will of Chernobog and demonkind will invariably twist these people to working towards the death of mortals, and the downfall of creation.

Demons come in a wide variety of types, only some of which have been recorded and identified by the churches, and even then, the accessibility of this information is incredibly limited. But the public perception is of twisted, humanoid beings of leathery, reddish-brown skin, no hair, twisted, bestial faces, and elongated horns. Some might have hooves, or claws; others, perhaps wings. But regardless of their variety, regardless that some might be physically strong while others show strange abilities or are simply more cunning, they are all entities of intense malice.

The most regularly-encountered demons are not strictly considered by the Church to be demons at all; rather, creatures which have over the centuries been so horrendously corrupted by demons as to be irrevocably changed. Varying from being wildly violent to possessing some limited, animalistic intelligence, the Demonspawn exist wherever demonic corruption is or has been strong, and were most noted for being a menace in the darker corners and the deep woodlands of Damryn.