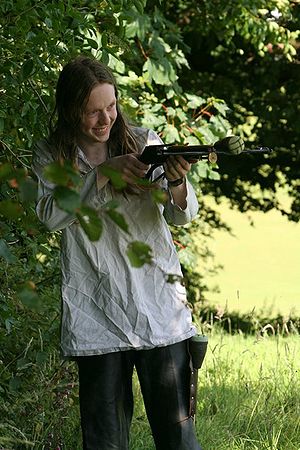 Ciarann Quinn is an intensely antisocial individual, whose desire for privacy is assisted by his tendency to disappear from sight for long periods of time. Paranoid, racist and superstitious, he is the very epitome of the peasantry of isolated, backwoods Andermark. His thick accent places him as formerly living close to the Damryn border, though he now presumably resides in the slums of Starkholm.

The extended Quinn family controlled three small villages on the heavily forested Damryn-Andermark border for many years. Roisin Quinn, the family's matriarch, had taken the highly unusual step of leaving Damryn, her country of birth, following the death of her husband. With the assistance of her lover, Fergus, and her children, Patrick, Brigid and Ciarann, she swiftly established herself as the effective authority over her small and isolated corner of the world. Using her family as muscle, coupled with wide-spread rumours of her practising witchcraft, any challengers to her dominance were swiftly either intimidated, beaten into silence, or simply made to vanish out in the woods. Living far from the castle of their nominal Lord, the family ensured that taxes were paid promptly and in full, working hard to divert the attention of the authorities from their activities. Ciarann's early life left him with few desires, save for three: to watch people who couldn't see him watching them, to hurt things that couldn't hurt him back, and to evade any and all negative consequences of those actions.

The Fall was a terrible time for everyone, and many things were lost in the chaos. Among those things were the Quinn family. As far as Ciarann knows, he is the only one to escape their village alive. The story of how he did so is hazy, and Ciarann is generally disinclined to tell it.

Shortly before the Last Stand of Starkholm Ciarann hooked up with a small mercenary unit called Red Company. An unsavoury collection of misanthropes, sadists, sociopaths and non-conformists, their sole common factor was that they had been refused membership of the famed Calavrian White Company, a noted mercenary band that had gained a fearsome reputation in the war. Ciarann and the rest of Red Company fought in the Last Stand, distinguishing themselves by losing only half of their fighting men, mostly due to a combination of skill, luck and judicious cowardice.

In the aftermath of the Last Stand, Red Company fell to pieces in a welter of recriminations, ego, and fights over division of what loot they had managed to steal from the honourable dead on the battlefield. Lacking any actual skills at anything but hunting and killing things, Ciarann sought employment in Ascher's Outriders, figuring them to be as good a way as any of making money. Since then he has fought Yotunaar, Wild Elves and Beastkin, and even a few normal bandits. He has steadfastly rebuffed any attempts at making friends, and refuses to socialise with the rest of the Outriders. When not working, he is most likely to be found acting as protection for Anderian merchants in the slums, or drinking in Anderian bars, declaring his hatred of foreigners, non-humans of all sorts, and anyone else who he can remember is worth his time and anger.

While on a routine hire for the Outriders, Ciarann's party was ambushed by villagers. Upon discovering the identity of the attackers, Ciarann left the party to seek revenge. Before his fellows could catch up with him, he returned to the village where the attackers lived, set fire to the building in which they were hiding, and shot two of them as they were fleeing, as well as setting several other buildings on fire. For this crime, Ciarann was tried by the local lord, who at the time was only eight years old, and the lord's mother. Deferring to the military chain of command, the young lord turned the judgement over to Rashel Francesco, who had been put in charge of the mission. Rashel determined that execution was the most fitting punishment, at which point Ciarann was, after some resistance, beheaded. By orders of the lord's mother, he was buried with full honours by the local priest of Vaitera.