Caelen is an elven warrior and relatively devout follower of Thoron. He earned the name 'Peacemaker' through his actions in relighting the brazier atop the Iron Tower and uniting the elven people. 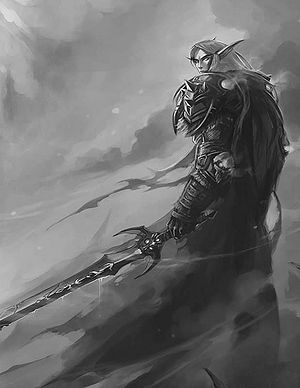 Caelen was born roughly fifty years before the Iron Tower of Leyroth fell. His father, Varyar, was a member of the Emperor's personal retinue and a man of considerable prestige. Elissime, his mother, was a noted arcanist and daughter of a magistrate. Unsurprisingly the young elf enjoyed a life of considerable comfort and ease. To the continued disappointment of his parents he fell into a life of vice and decadence. His name was a stain upon his family's good reputation with constant stories of his drunken brawling and debauchery.

Earon was born twenty years after Caelen and was considerably less of a disappointment. Perhaps spurred on by his embarrassment of a brother he studied hard that he might one day become a knight like his father and in turn, his father before him. The brothers had little to do with each other, the older becoming like a stranger to the younger. Their parents quietly despaired and placed their hopes in the future on young Earon. Caelen meanwhile was quite content in his haze of alcohol and harlots.

When the Trolls first began their suicidal exodus across the Iron Empire, Varyar was amongst the first called to serve. Whilst his father was sent abroad to assist the armies of the Empire, Caelen remained at home to squander their wealth and reputation on his own entertainment. When the Legion appeared and decimated the front lines of the Elven offensive, the retreat was ordered that they might be better prepared upon their next engagement. They fared little better with each subsequent attack and slowly the elves were forced back to Leyroth itself.

Varyar returned, weary from battle, to find his son at leisure with several bedfellows of less-than-satisfactory birth. Their argument almost drowned out the din of the Legion at the walls, culminating in the father cursing Caelen for his indolence at the end of the world. His mother had long since washed her hands of him, taking to guiding Earon through his training as a paladin in the service of Thoron. For months the siege held and Caelen did nothing save drink and make as much merriment as he could in those dark times.

The Legion eventually breached the walls and poured into the capitol. Varyar fought to protect the Emperor in the Iron Tower whilst the rest of his family sought shelter. It was decided that they should seek safety in the church of Thoron but they encountered the Legion first. Elissime was cut down by their unnatural blades and Earon was wounded before they were fought off. For the first time in his life Caelen had taken up arms for another rather than himself. No sooner had they reached the chapel then the second tragedy befell them.

Word spread quickly that the Iron Emperor had fallen. The Legion had breached the Iron Tower and slaughtered everyone they could find. Varyar had apparently never answered the call to arms and the testimony of another guardsman accused him of cowardice. Apparently Varyar had attempted to flee the Tower and escape with his family, his comrades cutting him down for his treachery. His corpse was found face down with a blade buried in his back only a few feet from the throne room.

Dishonoured, cursed and orphaned the brothers fled over the sea with what remained of their race. Having never seen the world beyond the Empire they both struggled to learn the tongue of mankind when they reached Calavria. With no practical skills but very practical needs, Caelen enlisted in the military. His father's treason earnt him some of the filthiest looks of his life however every man was needed against the Legion. He fought on the front lines and wherever else he was needed, learning what he could from whoever would teach him. Whilst he never earned the admiration of his comrades he soon gained a reputation for unorthodox tactics and dirty fighting. His brother studied with the priests and continued his pursuit of knighthood in honour of their parents.

At the fall of Lancereaux, Caelen had what could only be described as an 'epiphany'. After nine years of fighting the Legion he had slowly embraced the faith of Thoron as more than 'that thing the priests used to drone on about whilst he slept'. He had survived countless battles for no real reason. Caelen was neither brave enough to be a hero nor competent enough to be a champion of some great cause. Yet after all this time he still drew breath. It was during the retreat from the decimated nation that Caelen pledged to serve the Iron Father. That his drunken failure of a brother had now decided to take the same path as he did not endear Caelen to his brother. In fact, the younger elf took to denying any connection altogether.

Caelen struggled with the path of righteousness but for the first time he was dedicating himself to a higher path which would not result in bedding someone. At the Last Stand of Starkholm he was one of the many lucky enough to see Thoron himself take to the field. After over ten years of flight and fighting the Legion was finally defeated.

At the end of the Fall, Caelen was just another of the long line of elven refugees. Lacking any real talents other than looking good in armour and swinging a sword he quickly enlisted in the Outriders. He and Earon share a room at the Gatehouse though rarely appear in public together up to and including meals.

Caelen has accepted almost every contract offered by the Outriders in order to provide for his brother and himself. So far he has been part of expeditions to Calavria, Launcereaux and Ibarran with dents on his breastplate from a variety of indigenous wildlife. He fought at Wolfsgart though doesn't really talk about it much.

Most nights Caelen could be found getting steadily more drunk in any of the taverns around Starkholm. Occasionally he has been known to sing bawdy tales from his homeland or recount tales from his 'youth'. It quickly became clear to the young elf that he lacked the dedication necessary to follow the path of the paladin. Following some introspection he resigned from the church. The months following were spent working for the Outriders as well as earning extra coin from fighting matches and guard duty at the Rosy Thorn Brothel.

Caelen was among the first elves to join the White Aegis at Virhaven. Having seen the good such an organisation could do first hand and inspired by a certain noble act, he enlisted immediately. With the Lancesian army invading shortly after that, he has seen constant service at the front. Since then he has returned to the city a handful of times to assist in Outrider business including the Landsmeet. Even with the dissolution of the White Aegis government he has chosen to remain within the order.

When the Outriders left for Damryn he was amongst them. During the journey, several Outriders were captured in Caer Dinavor by the demon Izniat. Under torture and the demon's lies, Caelen was amongst those who bartered their souls for the release of 'innocents' from Hell. Thus damned they were only freed by the presence of an angel and given a year in which to discover the demon's true name and use it to destroy Izniat.

During his time in Ashenheart Rise he was promoted to the position of Lieutenant and made responsible for the training of new Kingsriders. It was then he was granted a vision by Thoron where he was commanded to 'Find the spark, light the beacon'. It took a while but eventually the elf learnt of an apocryphal beacon atop the Iron Tower that was used to unite the elven people in ancient times. Furthermore the smith Yanevi received a similar vision regarding the creation of a sacred blade, requiring a fragment of the Iron Tower itself. So it fell to Caelen to lead his people home for the first time in decades.

Their expedition to Leyroth revealed that there were elven survivors but they had regressed to a primal, attuned state. Without the unifying power of the Iron Tower they had adapted to their surroundings and tribe mentality. When the Kingsriders arrived they found themselves in the middle of a feud between the Blood and Shadow elves. Making their way to the Iron Tower, they faced trials within designed to test the worth of any elf seeking to reach the summit. Varyar's death was recreated before his son's eyes and Caelen was finally able to put his guilt to rest. Eventually they reached the pinnacle and Caelen beseeched Thoron for the power to ignite the brazier - and was answered. A new elf left the tower and brokered a truce between the warring elves, earning himself the name of 'Peacemaker'.

Time grew short by the time Yanevi completed his life's work, a pair of sanctified blades capable of wounding the unholy. Caelen was given the Iron Blade, a symbol for the rebirth of their people and means of his own salvation. Thus armed, the damned Kingsriders returned to Caer Dinavor to smite Izniat. Although the battle was long and bloody, the foul demon was destroyed and their souls were freed from his bargain. It was over.

In the following months, Caelen became increasingly involved with elven matters until eventually taking an indefinite leave of absence from the Kingsriders. He returned to Leyroth to assist in the rebuilding of his homeland, his closest friend Khan beside him.