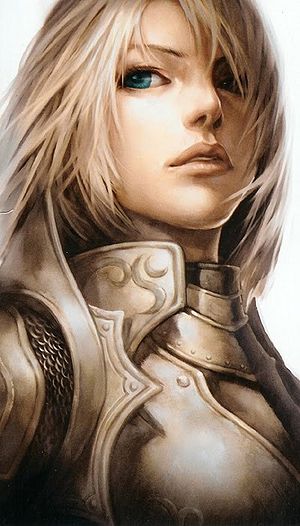 Aylanna (“Lani”) of the Voss is a Damryan member of the Outriders and a sworn knight of the Order of the Light Undying.

Lani was born in Sun’s Set of 16 PF, the youngest of four children. Her father Waylan Voss was a lord of the Damryn-Norlundar marches and bannerman to Lord Loghlin, as well as a semi-retired knight of the Light Undying. Her mother Ulrika was formerly of the Russ, an extended clan with a Norlish ancestry from the eastern mountains, sworn to protect against raids from across the narrow sea. By the time Lani had reached early childhood her eldest sister Ellia was already on the verge of womanhood by Damryan standards, her eldest brother Earen long since left home to be fostered as a page. This left only the youngest brother Kai, so it was that the two became close despite a significant age gap.

Growing up hearing bards sing of Aethon and the exploits of noble Damryan knights, Lani was resolved from a young age to become a paladin, despite the setbacks involved for a girl trying to join any knightly order. This resolve would only be strengthened when her favourite brother Kai would join the Light Undying as a novice. She trained with wooden swords, went on “quests” into the nearby woodlands with local children, and counted the days until she was old enough to plead entry into the local chapter house.

By the time Lani was ready, the Legion had advanced well into the Realm. Calavria, Norlundar and recently Lancereaux had fallen to the Legion, leading to a huge influx of refugees from both countries, and now the borders of Damryn were being threatened directly. Because of this, when she first went to her father Waylan on her eleventh birthday to ask his permission to join the Order his refusal was sharp and adamant. Despite being focused on the hunting of demons and demonspawn the paladins were still warriors of Damryn, and so had largely been diverted to reinforce the main Damryan military. Well aware of the dangers involved, with both his sons now serving in the Damryan military and his eldest daughter near the threatened Calavrian border, Lani’s father expressly forbade his youngest daughter from putting herself in such danger.

A few days later Ulrika Voss would return from a ranging into Legion territory and hear of the incident from the castle steward. Lani wouldn’t witness what happened when she returned, being too busy sulking in her rooms at the time, but later the servants would whisper that the Lady Ulrika had dismissed them from the great hall that night to speak with her husband alone. Precisely what happened next was never clear even to them, however when Lord Waylan emerged a half-hour he would speak not a word, but went to find his daughter and grimly tell her to start packing her things in readiness for a long journey. Lani would soon afterwards set off to join the nearest chapter house for training.

Less than two years later Ibarran would fall to the Legion, and Damryn would be fully besieged from north and south. Lani’s studies would grow more intense as the few senior members of the Order left trained their students for an increasingly desperate war. Two years after that would come news of a happier nature: Kai, already distinguished on the battlefield, had been accepted into the Royal Guard and transferred to the relative safety of Caer Brennan.

The happiness caused by this rare honour would not last, as that was the year Damryn fell.

The novices, too young and inexperienced to fight in the formal military, were quickly put to work guarding the refugee caravans fleeing west. Lani would soon taste real combat against the squads of Legionnaires that would appear to hunt the straggling refugees. In the chaos of flight and fighting, word of what was happening elsewhere came scantily, and she never heard anything about her family until the caravans finally reached Caer Brennan and she was reunited with her parents and two brothers.

Ellia would never arrive at all. Not long afterwards a refugee caravan arrived with her young daughter Ailith and news of her death along with her husband’s over six months before at the swords of the Legion. The loss would soon be followed by another, as Caer Brennan was besieged and conquered. What happened next was well documented. Lani’s last sight of Kai would be a glimpse caught as he followed his king back into the jaws of the Legion, before she too was caught up in the flight south.

Lani would be lucky enough to continue into Andermark with her family without any more losses. Being posted to guard the walls with other novices and inexperienced fighters during the Last Stand of Starkholm she would witness the arrival of the gods of themselves and Aethon himself lead the charge that destroyed the Legion. Taking this and her family’s survival of the battle as a sign, she returned to her training in the Order with renewed vigour, determined to serve Aethon as He had served His people.

In the process of service Lani would join the Outriders, enticed by their promises of reclaiming the lost nations and also by a healthy pragmatic need for money. Now a fully sworn paladin and therefore of an ideological mind, she firmly believes that the Outriders represent one of the Realm’s best hopes of recovery. Before the war she spent most of her time at the Gatehouse, training in the Outrider headquarters or at the chapel now housing the last of the Light Undying.

During her time with them she would be a part of many jobs, including an expedition to the ruins of Fordheim and the cleansing of Vierhaven, though for a long time she was reticent about what precisely had happened in the latter. She would also be a part of the defense of Wolfsgardt and the Kingsmoot that would see the crowning of High King Loghlin. The culminating moment of her career would come as her induction into the Warhounds of her order, one of the youngest ever paladins to be given the honour.

Upon the beginning of the war with the Mad Queen, Lani would join the expedition into Damryn. It would be during this that she and several others would encounter the demon called Izniat in the ruins of Caer Dinavor. Though eventually escaping, she did so at the cost of her soul. Along with her fellows she thus began a quest to discover a means to the true destruction of the demon and the freeing of their souls.

Under this cloud she would resign from the Warhounds and be put under probation from the Light Undying. As well as her quest to redeem the souls of herself and her comrades she would also be a part of the delegation to Caer Brennan. There she would discover Kai, alive though not entirely well. Though the two reconciled their differences as far as was possible Lani would still leave with High King Loghlin to go south, settling with her fellow Kinsgriders in Ashenheart Rise and discovering the nearby Chapel of Aethon's Light. It was also in this period that she would take the fellow Kingsrider (and imperiled soul) Isaac as a squire, and inform the Light Undying of the Chapel. The Light Undying would have fully moved into the Chapel within a fortnight, using it as a new base of operations to both protect the Damryn-Lancereaux border and start the cleansing of Damryn.

Soon after the beacon of Leyroth was lit by Caelan Peacemaker and two sacred blades would be forged from the remnants of the Iron Tower in the eternal fires of Aethon's Light. With these the Kingsriders would confront Izniat in High Sun of 4 AF and Lani would confront the demon. After a long and bloody battle the demon was destroyed and Lani would return to the Light Undying to be reinstated as a full paladin.

In Harvest’s End of 5 AF Lani would oversee the knighting of Isaac and his induction into the Light Undying. Soon afterwards she would leave to journey north to Caer Brennan, announcing her intention of converting its inhabitants back to the worhsip of the Church. She has not been seen since.