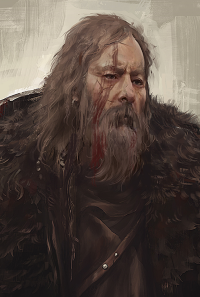 "Let the drink flow men, you have earned your place in the tales of legend!"

From a young age the man that would become known as "Seaborn" felt the lure of the open waters.

Hailing from the far north on the coast of Valmar he often took to the waters as part of the fishing fleets. Then later as one of the band of warriors who would head north towards the ice-shelf to hunt the monsters of the deep who summered there.

When the coastal dwarven settlements in the Eastern Reach came under attack from marauders based in The Lost Lands his was one of the vessels that answered the call from the dwarves to defend the coast.

After a successful campaign Rekki took his ship further south, there coming across the ports of The Lost Lands. For a man of the north he took to the lawless lifestyle of the lands quickly ultimately settling in the town of Tortenna.

Over the next decade he carved out a reputation as a fierce warrior as he led his crew against the pirates and bandits of the coast. He established himself as the Master of the local waters and took Tortenna for his own, a claim few have disputed with lasting success.

Now getting on in years he has taken to a more laid back lifestyle of ruling the port, allowing his children to take to the seas in his name.