"Take heart men of the north! This day shall be ours by the strength of our arms and writ with blood of our foe!" 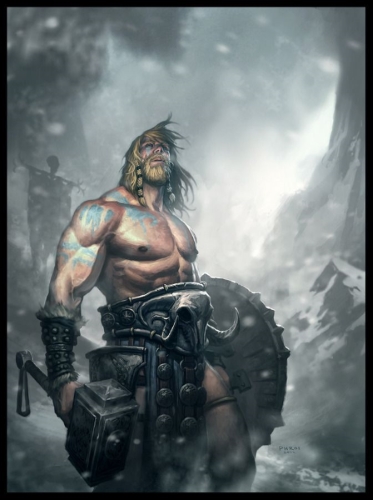 The name of Helek Greathammer was first heard in 303 BC. That year the snows of the northern range had thawed early into the season, prompting the ogre raids into Valmar.

That year was to prove a great loss of the people as the hand of the ogres came down heavily upon them. The defences were sundered and parties free to roam across the land.

The Jarl of Svalbad called all the clans together, a mighty army with which to drive out the ogres and free their lands. Marching west to the Empires borders they came across ruined towns and villages, each sacked and void of those who had once called them home. Incensed by what the found the army pushed on until upon the eighth day of their march they came upon the force of ogres.

Such an army had not been seen since the times of legend, as if the entirety of the Ogre Kingdoms had come upon them. The North Men were undaunted, here they would reap a terrible price upon the heads of the ogres. For every fallen child of the north a dozen ogres would meet their death.

The army of the Jarl went to battle, men fought towering brutes upon the high valleys until blood flowed as the melt waters across the rocks. But victory was slipping from the grasp of the men. In the heart of the battle the Jarl and his guard cut through the ogres, seeking the tyrant who led the incursion. With a cry that shook the mountains the brute fell upon the brave defenders. It stood over them, clad in the pelts of countless beasts and wielding an axe the span of a man's arms. It bellowed its challenge and the Jarl responded.

The fight was short, though great of skill and true of heart the Jarl was no match for the tyrant. With a swing of its axe the ogre cleaves the Jarl in twain, he lived just long enough to see the descending foot end his life and to here mocking laugher echoing from the valley walls.

A wave of shock passed across the men of the north, their advance faltering at the sight of their leader cut down. The stall nearly turned to rout as the ogres pressed on, were it not for the flash of golden light radiating from the centre of the field. A cry called out, an oath to crush the hated foes and victory for the north. Eyes turned upon the scene as all saw the rising of a great hammer, aflame with golden power come down upon the fallen ogre tyrant. There was no pause as the man leapt towards the staggered ogre forces, the hammer rose and fell in arcs of fire across the battlefield as again a cry rose from the man's lips. "Take heart men of the north! This day shall be ours by the strength of our arms and writ with blood of our foe!"

Each warrior upon that field of battle felt their chest swell, strength blazed through their forms as they too took up the cry. Their charge shattered the orge's army, sending them fleeing back into the mountains.

The day was won and the name of Helek Greathammer forever carved into legend.

Many did call for Helek to take the throne of Svalbad in light of the Jarls death but he declined, it was not his place, he claimed, to sit in grand halls. His was upon the battlefield, shedding the blood of their foes.

Over the following decades the Valmar held off countless raids from both the ogres and the beasts of the sea. The battles of those times have been recounted many times over in the halls since, each one etched into the history of the north.

Helek's death was to come in the autumn of 281 BC. The snows came late that year and the raiding season was running long. The defenders were pushed to breaking as raid after raid fell upon them.

Helek gathered his warriors, proposing to hunt the leader of the raids and take their head. His quest took him to the highest reaches of the lands. There he battled the leader, a great ogre many times his size. About them Helek's warriors cut through the ogres as their hero struck blow upon blow against the brute. As the fight worn on Helek's strength began to ebb, a heavy strike knocked him to the ground before the ogre reached down. Taking Helek about the throat it lifted him up so that he might see the man's face we it crushed the life from him.

Those that witnessed the scene claim a golden light shone from Helek's fist as he struck the ogre about its head in a crash of flame and blood that felled the brute. As his men cut down the last of the ogres Helek Greathammer staggered to his feet, it is said his lived long enough to see the battle won before he fell.

The warriors bore his body back from the mountains, laying him to rest in the tombs beneath the Everpeaks alongside the other great warriors of the north.