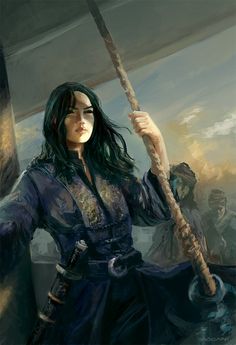 "You dare defy me?! I shall have your head!"

The port of Van Harr sits at the very heart of The Lost Lands, before the events of the Cataclysm is was a busy trade port that served the world wide shipping routes. When the Cataclysm struck and the flow of business from Virmor died overnight Van Harr was the first of the northern ports to fall into anarchy.

From this chaotic time would rise the family that would go on to rule the port. The origins of the family are lost to time but shortly after their bloody rise to power they took the name Van Harr for themselves.

For two hundred years the Van Harrs have rules the port with an iron first, swift to dispense retribution against any who would dare challenge their authority.

Moren was the youngest child of the previous ruler, her farther, Drenvor Van Harr. Being the youngest she was destined never to inherit the throne from her ageing father and so took steps to ensure she would receive what she saw as her rightful place in the world.

Her eldest sibling met with disaster when his vessel sank with the loss of all hands. The next in line met an untimely end by way of a venomous spider bite when one found its way into his bed. When her father passed after a accident involving a tainted barrel of rum and her final sibling died following a run in with Moren's ogre bodyguard the way was clear for her to take the seat of power.

By this time any other who had thoughts of contesting her claim quickly changed their mind or met with fatal accidents. Since her rise to power The Governess has left a bloody trail across The Lost Lands cementing a small kingdom of her own that she rules with a brutal and ruthless efficiency.