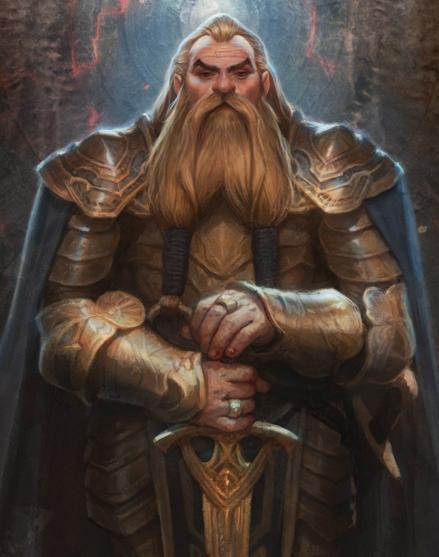 Dwarves are the second most numerous of the civilised races after humans. Although they occupy only Ilmarin, they are spread across nearly half of the continent, both above and below ground. Most live in the Empire of Steel and Stone, though there are scattered diasporas in the Lost Lands and along the southern coasts in cities now ruled over by humans.

Dwarves average five feet in height, ranging between 4’2’’ and 5’4’’. The tallest dwarf ever recorded was Korgan Thunderfist, who reportedly reached 5’7’’ in height. However they tend to be stockier in build than humans, with thicker bones and broader bodies, denser muscles and craggier features. This has the advantage of making dwarves tougher and more able to absorb physical damage than most other civilised races, a trait that has done much for them in the conflicts before, since and most particularly during the Shadow War.

The average dwarven lifespan is roughly 150 years, though some have reached 200 years. Dwarven children age a little more slowly that the human average, reaching puberty at roughly 16 years of age and adulthood at the age of twenty-five.

Dwarves are a social race. Most dwarves will become extremely uncomfortable when alone, descending into depression and sometimes even psychosis. Lone dwarves are therefore regarded with suspicion, even those that by some quirk avoid developing these issues.

Because of this dwarves are inclined to form groups with strong social bonds. They are most comfortable in groups with other dwarves, but at a pinch dwarves that are part of a diaspora will form groups with other races as well. As long as these groups are united by a similar set of principles, they function well enough for dwarves to feel comfortable within them. Once a dwarf has developed bonds with any group, they tend to remain utterly loyal to them, and function better in orderly groups or societies.

Dwarves are a playable race. A dwarf character may choose to have +1 body hits upon startup to represent the toughness of the average dwarf.

There is no baseline costume for dwarves, but dedicated players may wish to use latex prosthetics to represent the average dwarf’s craggier features, and to distinguish them from human characters.