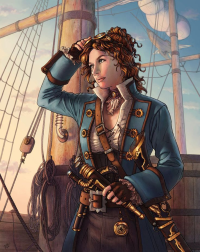 "Have at them! Draw them across the rocks!"

Avana Laine once commanded an ad-hock fleet of raiding vessels that would assault the southern coast of Ilmarin.

She drew great success from her knowledge of the treacherous currents around the Broken Isles. Avoiding capture for many years by leading unwary vessels into shallow waters or to crash upon hidden rocks.

Eventual capture came when a shot from an Agryan warship took out the sails of her ship. Faced with imprisonment or execution at the hands of the Agryan Navy Laine was offered a choice. Take sail under the Silver Banner or hang. Agryos could use one of her skill.

Laine accepted the offer, for the first years of her service she was kept under close observation before it was deemed her loyalties were true. Given command of a privateer vessel Captain Laine was tasked with waging war upon the fortified ports of The Lost Lands. A mission she has taken to with much success.