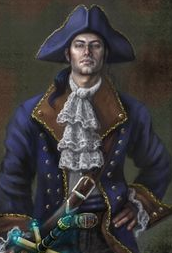 "The sound of the sea, only matched in its crisp beauty by that of a full broadside striking true."

Of Agryan decent Forden made his name captaining the escort ships which protected the shipping lanes to distant Anaturu.

After many years of independent service out of Farhaven he settled within the city for what was deemed to be a well earned retirement. That was before he was approached with the offer to command one of the privateer vessels funded by New Agryos to wage war on the lawless pirate crews of The Lost Lands.

Since accepting the coin of the silver banner Forden has lead many successful raids into hostile territory, sinking numerous pirate ships.